One of the most exciting artists of his generation, Craig has performed concertos with all the top orchestras – including the LSO, BBC Symphony, Royal Philharmonic and Hallé. He is also much sought after for chamber music, and is a prolific and highly acclaimed recording artist – to be found on the Chandos and Classic FM labels in particular.

Adrian studied at Winchester College, Cambridge University, and with Frans Helmerson at the Cologne Music Conservatoire. His close musical relationship with his father Alfred led to many chamber music appearances throughout the world, and to a critically acclaimed Philips recording of Beethoven’s complete music for cello and piano. His piano trio with Till Fellner and Lisa Batiashvili is also much in demand throughout Europe. Adrian is co-founder of ‘Music at Plush’, a summer music festival held every year in Dorset, South-West England.

Former Winchester College scholar Harry won the BBC Young Choristers competition in 2003, before embarking on a broadcasting and performing career that has included BBC TV and Radio, the Royal Albert Hall and Glyndebourne. Harry studied music at the Queen’s College, Oxford, and now works as a freelance conductor, composer, and singer.

Dominic is leader, founder and director of the St George’s Chamber Orchestra. Educated at Winchester College and the Royal College of Music, he has also appeared as leader with a number of other orchestras – including the Ulster, Royal Liverpool Philharmonic, and Bournemouth Symphony.

One of the UK’s most versatile young musicians, Richard is beginning to earn a reputation both as a performing cellist and as a composer and arranger. He read Music at Cambridge University before studying as a postgraduate cellist at the Guildhall School of Music and Drama. In 2011 he joined the Philharmonia Orchestra, and he also directs cello octet Cellophony.

Ed was taught singing by Julian Smith at Winchester College. He went on to read PPE at Magdalen College, Oxford, where he was an academic and choral scholar. He has been a member of several close harmony groups – currently the Oxford Clerks; as a soloist he has particularly enjoyed the English song and German lieder repertoires.

Top British prize-winner at the ‘Paganini competition’, Andrew has held a succession of distinguished positions – including leader of the BBC Symphony Orchestra and first violin of the Brodsky Quartet. He has also appeared as guest leader for an impressive array of other pre-eminent orchestras – amongst them the LSO, RPO and Hong Kong Philharmonic. He is currently joint concert master of the Philharmonia, the Sydney Symphony, and John Wilson Orchestras.

Amy works with many of the country’s leading vocal ensembles including EXAUDI, the Tallis Scholars, and Synergy Vocals. In regular demand as a soloist in the UK and internationally, her voice has been described as ‘ravishing’ by BBC Radio 3’s CD Review.

Senior music and piano teacher at Winchester College, and principal musical advisor for this album. A former percussionist in the National Youth Orchestra and organ scholar at Christ Church College, Oxford, Robert has performed in concert halls from Iceland to India – including the Wigmore Hall, Queen Elizabeth Hall, and Purcell Room.

Born in London in 1982 and graduating from the Royal Northern College of Music in 2004, Ben has gone on to establish a reputation as one of the UK’s most versatile young pianists. As a concerto soloist he has performed with an impressive array of major symphony orchestras.

Andrew is currently principal flute with the West Australia Symphony Orchestra – having held the same position with the Hong Kong Philharmonic, Hallé, and RPO. He has recorded as a concerto soloist with the Hallé and Sir Mark Elgar, and with the Royal Philharmonic and John Rutter. He can also be heard on various TV and film soundtracks, including Harry Potter.

David has held various London Principal positions including those of the BBC Symphony, Royal Opera House, and London Philharmonic orchestras. He also records for many TV and film soundtracks – including Lord of the Rings and Harry Potter.

Winner of the International Clarinet Congress Competition, Michael is Principal Clarinet with the Royal Philharmonic Orchestra and Professor at Trinity Laban. His recordings include Mozart and Gunning Concerti with the RPO, and the Stravinsky Ebony Concerto with the Philharmonia.

Laurence was appointed Principal Horn of the Royal Philharmonic Orchestra in 2008, having held the same position with the Philharmonia for the previous 10 years. He is also in great demand as a guest principal with the UK’s other top ensembles, and can be heard on many film and TV soundtracks. 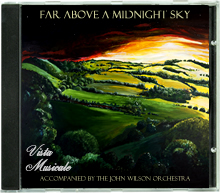 "I love it all... so start the CD, surrender, let your eyes mist over when no one is looking, but maybe, with such a gorgeous box of musical chocolates on your CD player, savour a few tracks at a time rather than gobble it all at once"

Visit our You Tube Channel